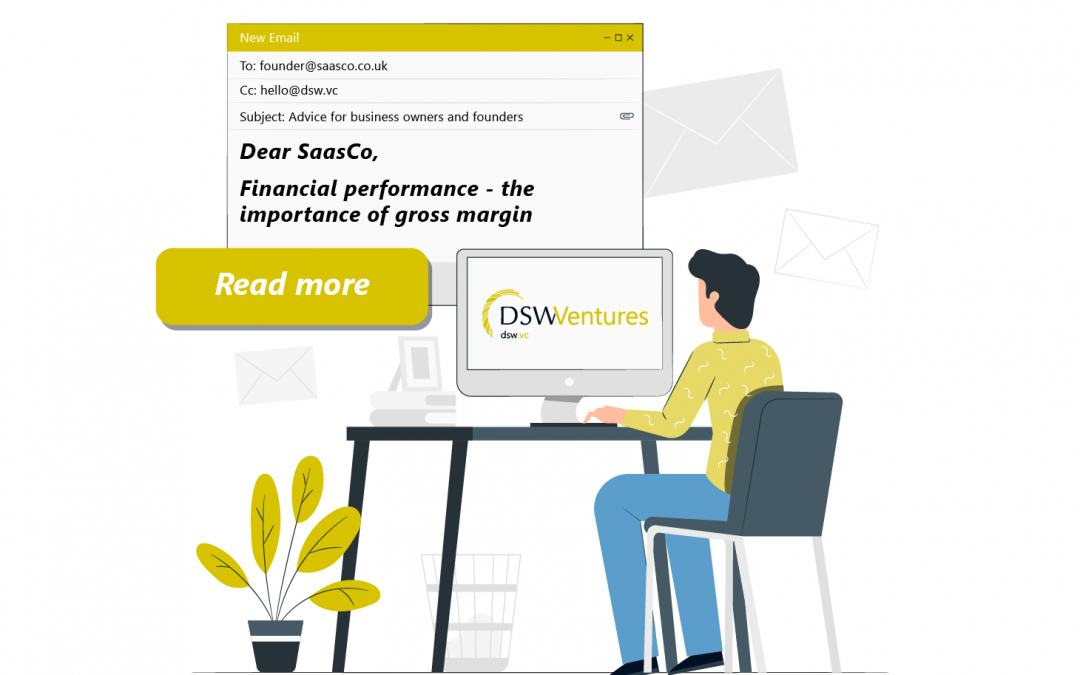 VCs often look at revenues as a benchmark for valuation – we do this because (1) the companies we invest in are very early-stage and have no EBITDA and (2) because, in most software/technology businesses costs of sales are negligible and become increasingly so as the company scales – so revenues and gross profit are reasonably analogous. Revenue benchmarking is one of the reasons why we see so many decks with Total Transaction Value reported as revenue – please don’t do this… 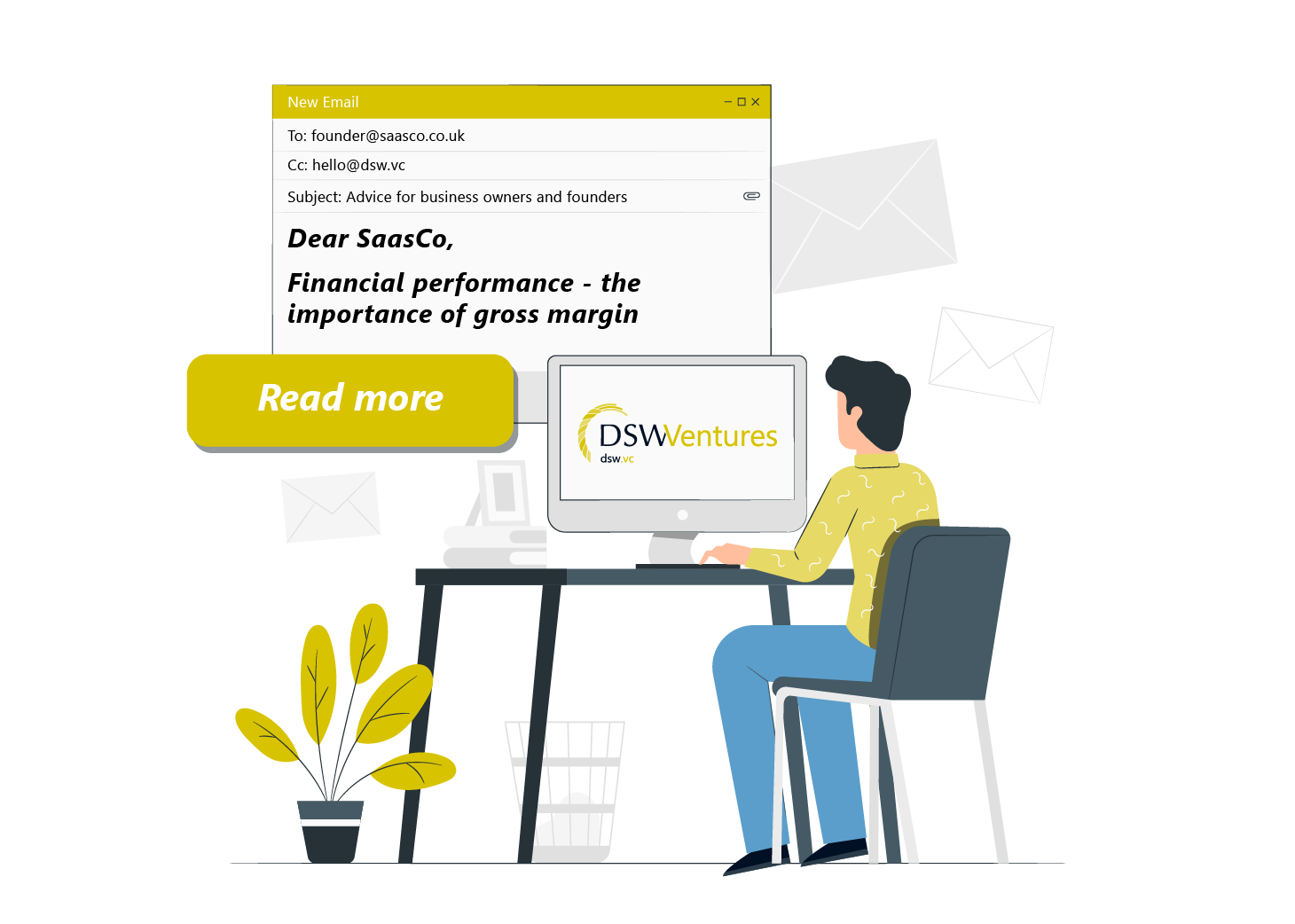 This approach to valuation is fine as long as assumption 2 holds. If we have two companies, both with the same market dynamics, growth opportunities, revenue growth and overheads but one is 75% gross margin (red line) and the other 90% gross margin (orange line), then which one is more valuable? Clearly the second – as it scales and matures it becomes significantly more profitable. In this example, by the end of year 6 the 90% GM business is worth £27m more on a 12x EBITDA multiple. So investors will look carefully at gross profits and where there is significant costs of sales, value companies on that basis. 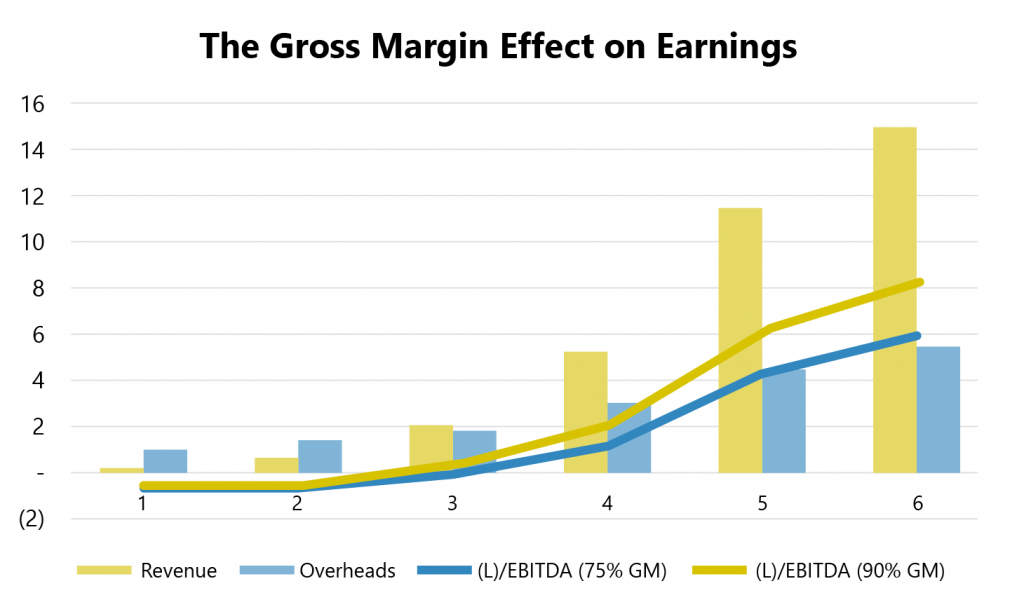 So revenue is not THE value driver for an early-stage business – gross profit is. So founders should consider gross margin percentage a critical management KPI.

We often see gross profit that is understated in some way, and occasionally see everything and the kitchen sink thrown into cost of sales. It’s important to think about the dynamics of the costs – if there are any aspects of cost which directly relate or could possibly relate to future periods, then maybe they are not really cost of sales and should be reported in overheads – or at least excluded from your Gross Margin KPI. Some common examples:

This thought process, the resultant output and analysis of GM% as a KPI may well lead founders and management teams to a much better understanding of the profitability dynamics of SaasCo. The gross margin now will certainly affect the perception of future profitability of the business – and that will affect investors’ and strategic buyers’ valuations.

Understand your overhead base and monitor contribution %

Whilst in the early stages of a business, the nature of overheads is less relevant than the gross burn (overheads before gross profit) and net burn (overheads after gross profit). Whether a cost is “fixed” or “variable” couldn’t be further from a founder’s mind. However, as a company gets more mature, the nature of overhead and “contribution” should begin to become a factor. Contribution is Gross Profit less Variable Costs (overheads less “Fixed” costs). The contribution margin for a given year shows the percentage of revenue that will remain in the business to cover the company’s fixed costs.

In early years, the cost of building a sales pipeline and marketing the product are likely to outweigh the gross profit that can be generated by the product, so contribution is likely to be negative. Ultimately, we are looking to make a profitable SaaS company, so the first step on that journey is making a positive contribution. This is where cohort analysis and unit economics come in handy, which we will cover in part 3.